A Mother, A Son and Autism: An ICT Family Story 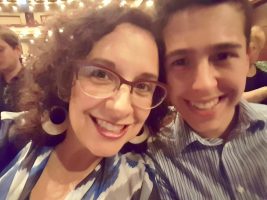 This Autism Awareness Month, we are honored to highlight an interview with Julie Jacobs and her 16 year-old son Zev, who has autism and attends one of our social communication groups at Integrated Children’s Therapy (ICT). Zev is the oldest of four children. He has a sister and twin brothers—one of whom has also been diagnosed with autism.

Julie Jacobs knew something was different about her son Zev when he was 18 months old. “We went to Gymboree classes and I noticed he was behaving differently than the other kids,” she says. He wasn’t talking or jumping like his same-age peers. Julie called her mother and said, “Did you have to teach me how to jump?” No, her mother said. It just happened naturally.

Jumping was one of many things that seemed to happen naturally for other kids that Julie and her husband had to actively teach their son. “We practiced jumping over and over until he got it,” she says.

Zev points out that speech was another skill he struggled with at first, like many kids with autism. “When I was 31 months old I said less than 10 words,” he says. “My parents did a lot to help me talk.”

Julie describes how she helped Zev speak by creating an ongoing narration. “I talked all the time,” she says. “I named everything I could, and described everything I was doing. I’d say, Now I’m washing the dishes. This is a plate. This is a cup.”

Julie and her husband learned that practice was important in other areas, too, like role-playing what to expect in certain situations. Kids with autism often have a hard time being flexible when they don’t know what to expect. Julie illustrates this with a story about a trip to Disney World. She can’t remember when it was, so she asks Zev.

“So we were on a ride,” Julie continues, “and when it was over Zev didn’t realize he had to get off, and he wanted to go again. I was trying and trying to get him off and other parents were yelling at me, asking why I couldn’t control my child.”

Preparing for what to expect, as well as how to be flexible when unexpected changes in plans or routines arise, are strategies the family has learned from different types of therapy. Therapy has been a mainstay for Zev since he was a toddler, and Julie stresses the importance of early intervention.

“When Zev was a baby, his pediatrician told us he would grow out of the things we were worried about,” she says. Others were similarly unconcerned. “People would tell me how lucky I was to have such an easy baby, because he sat and played by himself quietly and never cried.” She and her husband knew, though, that something wasn’t right, and they began the long road of doing everything in their power to help their child.

Julie tells a story that illustrates her willingness to do whatever it takes. She talks about how she used to crawl on her hands and knees into the synagogue where she is a rabbi, with Zev crawling in behind her. “It was the only way he would enter the room,” she says. “You learn patience,” she adds, “and empathy. I never, ever judge another parent.”

Empathy and judgment come up again, this time about Zev. “One of the most beautiful things about him is that he never judges anyone.” Julie says. “He isn’t mean because he doesn’t know how to be.”

The reason Zev doesn’t know how to be mean is because one of the main characteristics of autism is having difficulty understanding social communication. Mandy Alvarez, ICT’s co-founder and director of speech-language therapy describes social communication as “being able to relate to others and understand the verbal and non-verbal nuances of back-and-forth interaction.”

Struggling to understand those nuances is why Zev joined a social communication group at ICT. “At school during lunch, there are kids that don’t talk to me. It’s stressful and I feel frustrated, so my mom suggested the group.”

He goes on to say how Melissa Marinelli Izquierdo, speech-language pathologist and assistant director of speech-language therapy at ICT, helps group members practice the social skills many of us take for granted but can be exceedingly difficult for kids with autism. “Miss Melissa helps us out with things like how to make eye contact and speak clearly—how to have a conversation or play a board game,” he says.

But the first thing he mentioned about the group, before listing the social skills they practice, was the thing many parents of kids with autism tell us is their greatest wish. It’s what Mandy Alvarez calls the hallmark of childhood, and the reason she co-founded ICT over a decade ago: