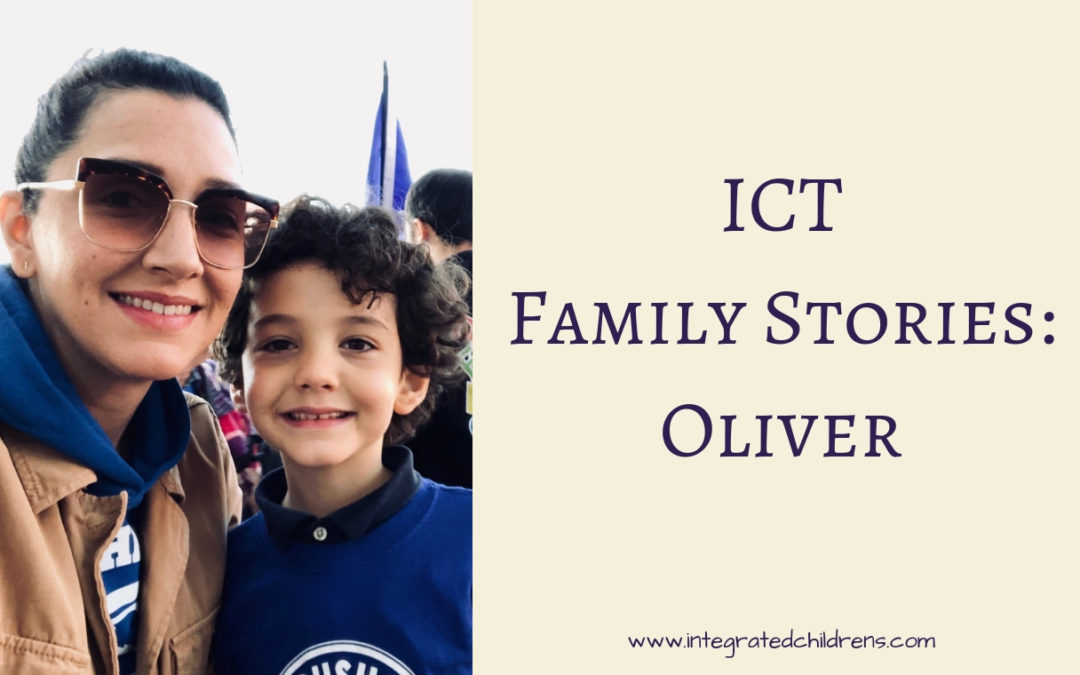 For this ICT Family Story we sat down with Karina O. to talk about her son, Oliver, who receives speech-language therapy from us and is a regular at our camps.

When Oliver was diagnosed with autism and sensory processing disorder (SPD), he was three years old and still drinking from a baby bottle. “He found it nearly impossible to drink from anything else,” Karina says. His pediatrician thought he would eventually grow out of it. But Karina was pregnant with her second child, which underscored that Oliver just wasn’t a baby anymore.

“One day we went out and I left the bottle at home,” Karina says. “When Oliver realized he would have to drink from a cup his reaction was extreme. For more than 72 hours he refused to do it, and we had to spoon-feed him sips of water so he wouldn’t become dehydrated.”

Karina decided to take matters into her own hands, and sought help.

She didn’t suspect the autism and SPD diagnoses, although now she can easily spot red flags in her memories of his baby and toddler years. Signs of autism included low muscle tone that made it difficult for him to crawl and walk, being verbal but struggling to put words and sentences together, and making repetitive movements while playing. It was because of SPD (which makes it difficult to process information coming in through the senses) that he had such a hard time giving up the bottle.

The diagnoses were a shock. “It’s not what any parent wants to hear,” says Karina. “It took me a long time to articulate what I was feeling.” In the beginning she only talked about it with family and close friends. “Any parent worries about helping their child navigate through life; when you realize your child has special needs it takes that worry to a new level.”

Karina credits Mandy, ICT’s founder, for helping her cope with that worry. “Oliver’s diagnoses were a lot to take in, and Mandy was a very grounding person in my life at that time. She was calm and open, and a wealth of information.”

It was at ICT that Oliver began countless therapy sessions: Speech-language therapy to help him communicate and relate to others, occupational therapy to help him perform daily tasks and regulate his feelings and behavior, and feeding therapy to teach him to drink from a cup and straw. In addition to ICT’s services, he received physical therapy as well.

Today, Karina says, Oliver is “doing incredibly well.” He is 7, attending school, and a walking encyclopedia on dinosaurs — thanks to endlessly studying them through books and documentaries.

Being fixated on a subject the way Oliver is about dinosaurs is a hallmark of autism and one that used to concern Karina. Now, she finds his role as expert paleontologist endearing. “It highlights how extremely bright he is,” she says. “He knows every possible thing about them. His enthusiasm for acquiring knowledge is motivational to watch.”

Another hallmark of autism is difficulty relating to others, and Karina sees Oliver’s ability to learn and retain information as a social strength. “Even if a child can’t understand him fully, he can impress them with everything he knows. He feels proud, and it helps him fit in.”

When asked what advice she would give parents just learning of a child’s diagnosis of a developmental disorder, Karina draws on her experience with ICT: “When you’re new to the therapy world there are so many options and you don’t know what to expect, but it’s important to find the right help. When we found ICT they were not only knowledgeable and professional, but also warm and genuine — just very human. Their play-based approach helped us feel relaxed, and they included us in everything.” Mandy has been a “huge advocate” for Oliver, she adds, helping facilitate a school placement when other schools turned them away.

Above all, says Karina, “look for people who show your child love and patience, recognize their strengths, and help you move forward, day by day.”

After four years of moving forward, day by day, Karina looks at Oliver and his strengths shine: “He is honest, endearing, sweet, and so smart…I can’t imagine him being any other child.”