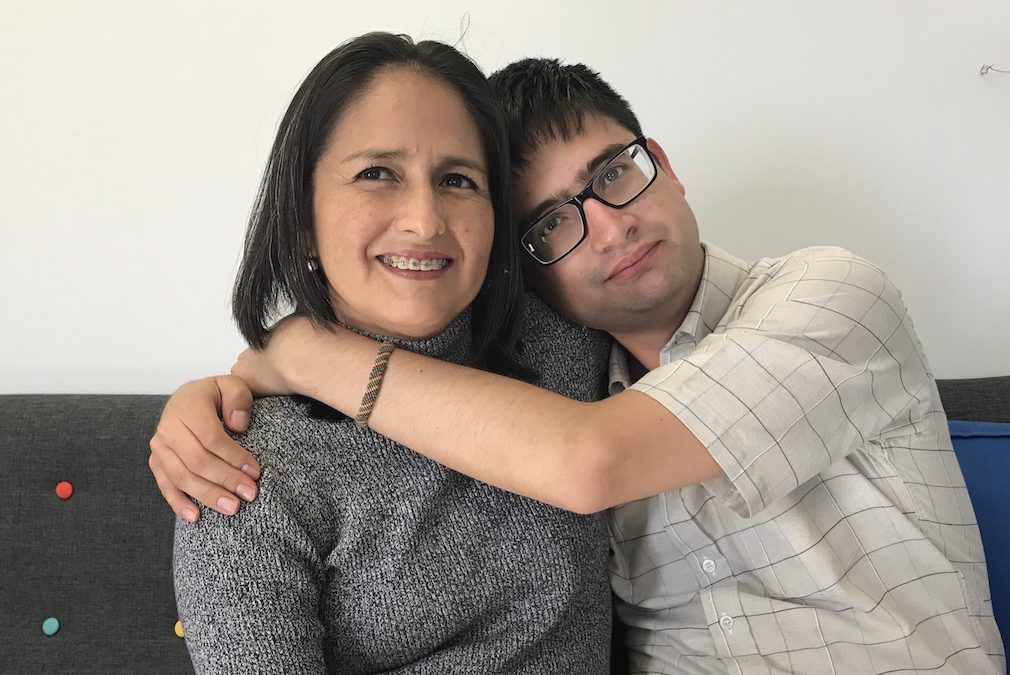 We meet 23 year-old Antonio and his mother, Giovana, at our offices to talk about growing up with autism. It has been nearly 15 years since Antonio first came to Integrated Children’s Therapy (ICT), when he was in fourth grade. By that time the family’s autism journey was well underway.

The journey began when Antonio was a year old and his father, who was interested in neurology, noticed that he did not turn his head when they called his name. He didn’t meet their gaze, or initiate interactions with them. He wasn’t using sounds, gestures, or words to communicate.

“Our pediatrician told us not worry,” Giovana says. “He said Antonio was delayed because we were speaking two languages at home.”

Giovana, in the first of endless steps she would take to advocate for her son, found a new pediatrician who acknowledged her concerns and ordered an evaluation. Antonio was diagnosed with autism at age two-and-a-half.

Right away Giovana reached out to other parents of children with autism. “I knew it was okay cry, and feel sad and scared about the uncertainty of his future, but I also knew I couldn’t isolate myself,” she says. “I needed to communicate with other parents who’d gone through it, to find out what had worked for them and what hadn’t. I needed their support to make a plan.”

Giovana’s plan led her and her husband to enroll Antonio in speech and occupational therapy twice a week. Giovana observed these sessions to learn as much as she could. She signed up to become trained in Applied Behavior Analysis so she could do it with Antonio at home. She read books about autism and attended conferences about interventions, trying to gain as much knowledge as possible.

Inevitably, there were roadblocks. “At some point we started to have issues with insurance not paying for services,” Giovana says. That’s when they found CARD (University of Miami – Nova Southeastern University Center for Autism & Related Disabilities). CARD connected the family to services, walked with them as they searched for a school that was a good fit, and continues to support them today.

As we discuss the roadblocks, Antonio keeps the mood light by interjecting jokes into the conversation. When Giovana gets to the part of the story where Antonio started at ICT at age 9, he recalls a favorite activity he did with Mandy Alvarez, ICT’s founder.

“We made a movie about emotions,” he says. “It was about how to express them and deal with them, like do’s and don’ts.”

Giovana points out that this type of therapy, in which the therapist uses the child’s interests to motivate them and guide treatment, was new for them. “We were used to therapy goals being the focus,” she says, “but at ICT the focus was the relationship. They really got to know him and what he liked, then based the therapy on that.”

Giovana was also impressed by how a play-based approach (DIR/Floortime®) not only motivated Antonio, but also shifted his mood. “During therapy he was having fun. He was happy and peaceful. He could just be a kid.”

This emphasis on play changed Giovana’s thinking about the best way to help her son. “Up to that point I was focused on milestones—which behaviors he was supposed to master by a certain age,” she says. “Like reading; I thought that if I could just get him to read, everything else would be okay.” When they started at ICT, Giovanna realized that what Antonio really needed was support developing his social and emotional skills.

Aside from focusing on play and social and emotional development, Giovana appreciated that at ICT “every day was new day.” With developmental challenges, she says, “you can’t dwell on the setbacks. You take two steps forward and one step back, and start each day where you left off the day before.”

Today, the steps forward are clear. While social interaction is one of the biggest challenges for those with autism, Antonio has made strides. He jokes with us throughout the interview and tells us about where he lives.

Antonio lives in a home with other young adults with autism. How to best support adults with autism is difficult question for parents. This choice, Giovana says, has been a positive experience. Antonio has learned life skills and gained a bit of independence, while still spending plenty of time with his parents and younger siblings. He has friends, with whom he watches movies, or goes bowling or to the park. He gets out into the community every day.

It was out in the community that Antonio became interested in public transportation. “Miami-Dade Transit is my favorite thing,” he says. “I want to work on a train one day.”

We spend the rest of the interview taking about Antonio’s other favorite thing: Music. He uses his phone to play Alvarez’ favorite song, which they used to listen to together during therapy many years ago. We listen to some of his favorite songs and have a little dance party.

Before we say goodbye Antonio reflects on our conversation about the ups and downs of his family’s journey in a way that highlights his emotional growth: “Today was a wonderful day,” he says. “My mom was sad and happy at the same time, and I felt that way too.”