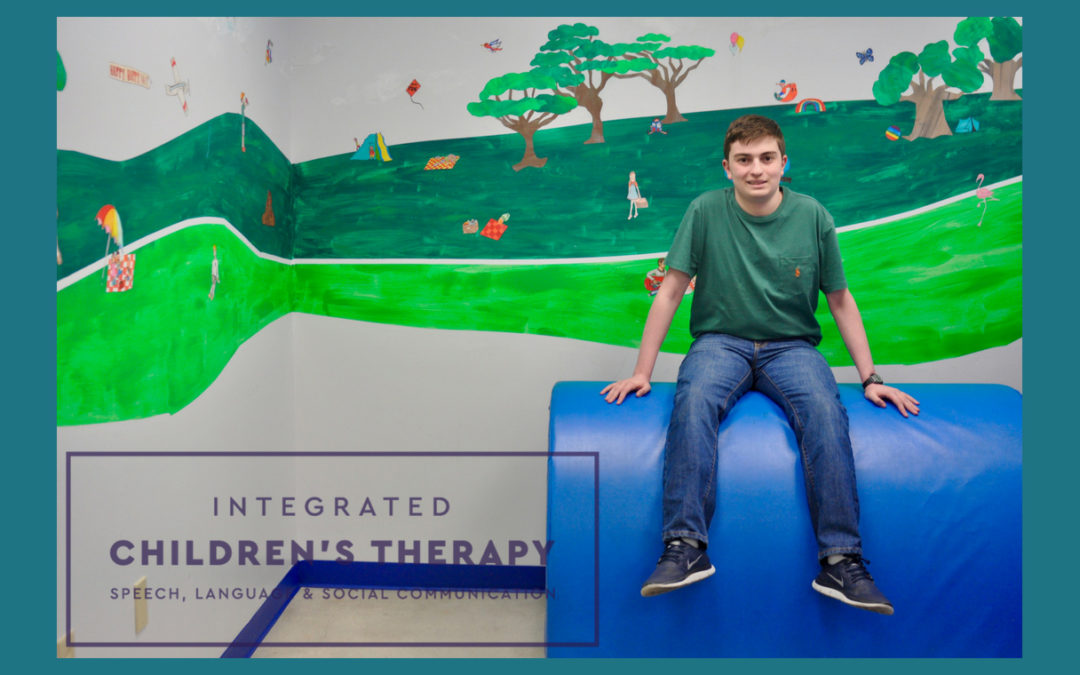 When Integrated Children’s Therapy Founder Mandy Alvarez opened a new facility last year, the blank walls presented a unique opportunity. “We have two talented artists in our teen social group,” says Alvarez, “and I thought, ‘Who better to help decorate the new space?’”

The two teens, sophomores David and G*, worked alongside local artists Sara Kaplan and Molly McGreevy to create a 10-foot mural wrapping around one of the therapy rooms. “I was thrilled when they agreed to do the mural,” Alvarez says. “I really wanted to share their talents with the community.”

David became part of the ICT community when he was just two years old, and G when he was in early elementary school. For both, challenges with social interaction have presented difficult hurdles for them at school. “In elementary school I was being bullied,” says G. “I had a hard time because it wasn’t easy for me to connect with people.”

The boys talk about how weekly group therapy has taught them social communication skills that help them navigate social interactions. The mural project highlighted how far the boys have come. “It required them to use interaction skills like group brainstorming and planning, collaborating, and supporting each other’s individual efforts,” says Alvarez.

One of the most difficult interaction skills is perspective taking, or being able to see something from someone else’s point of view. Alvarez points out that the mural project was “a very concrete way to see that someone else can perceive something differently than you. The theme was a picnic, but everyone’s idea of what a picnic was and how to symbolize it was different. The mural is four perspectives coming together to tell the same story.” Art as a Communication Tool

Creating the mural was not only an opportunity to use communication skills, it also highlighted that art, in itself, is a powerful communication tool. Both boys have used art to express themselves since they were very young. David’s mother Rosy says she “noticed in early elementary school that art came naturally for him.” She describes how David began drawing comic-strip stories featuring adventures of a character dealing with the ups and downs of life.

Kaplan noticed right away that both boys had an uncanny ability to focus for long periods of drawing time—a type of focus that commonly goes hand-in-hand with social challenges. “The children who feel uncomfortable interacting with others spend more time engrossed in their own activities,” Alvarez says.

“I don’t see that as a bad thing, especially when it comes to art,” Kaplan says. “Getting lost in your head allows for a level of concentration and depth that’s hard to come by. The boys may have a history of struggling to communicate in the traditional way, but what they can communicate through art is truly profound.”

McGreevy points out that aside from self-expression, the boys’ art reflects their personalities. “When you look at the drawings, things like sense of humor and attention to detail shine through.” What Alvarez appreciates most about the mural is that it highlights the boys’ strengths. “Kids come to therapy because they’ve been struggling with something. Their parents are worried about them, and the focus naturally falls on the chid’s challenges. Doing something like this reminds the community that a child is so much more than his struggles; he has unique and special strengths.”

Children who struggle socially, Alvarez adds, are often targets for bullying and at risk for low self-esteem. She hopes to find more opportunities like the mural project that help children find their place and encourage their peers to see the strengths that often get overlooked.

David and G’s strengths are now permanently on display, as both decoration and inspiration for other children who use the therapy room. Ideas for The Future

The boys agree that the project was a positive experience. “I’ve met artists, but I’ve never worked with them,” G says. “Sara and Molly were open and creative, and easy to connect with because we’re all interested in art.”

David agrees. “I never thought I’d meet real artists,” he says. “They were encouraging. Now I think I could use my art for something.”

For David’s mother Rosy, the project changed her view of what’s possible for David’s future. “Seeing him feel motivated, happy to be a part of something meaningful, and proud of what he accomplished made me think that maybe he could make a living with his art.”

Perhaps even more meaningful to Rosy is that David saw the mural as a way to give back to Alvarez and ICT for the many years of support they’ve offered him and his family. “It was a way to say thank you,” Rosy says.

David agrees, as he proudly stands in front the mural for a photo: “I wouldn’t be as positive, friendly, kind and polite without ICT.” David with his mother, Rosy (L) and Alvarez (R)

* ICT respected G’s wish to remain anonymous for this story.